update: Nevermind. Check this post instead.
As I wrote about yesterday, Virginia’s decision not to play in the Champs Sports Bowl, or any other bowl during exams, made a mess of the ACC bowl selections. The Champs Bowl didn’t want Georgia Tech (the only other ACC school they had to pick from and the MPC Bowl in Boise didn’t want UVA (and vice-versa, I’m sure).
It was going to take some other bowls without ACC ties to get into the picture. That appears to have happened. The Independence Bowl seems set to match up UVA with Oklahoma State. That’s actually a pretty good game. The game is on December 28, and it’s in Shreveport, LA, so it’s not terribly attractive to traveling fans, but it should be fun to watch.

Yale and Harvard, much like Cal Berkeley and Stanford, have a long tradition of pranking each other before their yearly football game. This year, Yale got off a great one. Several Elis (is that a dumb nickname for a college of smart people, or what?) dressed up as members of “The Harvard Pep Squad” and passed out red and white placards. They told the Crimson (OK, that one’s almost as bad) fans that the signs would spell out “Go Harvard.” They lied.
The signs instead spelled out “We Suck.” There are pics and a video at that link.
I wonder if any ACC schools could pull something like that off?

I’m not really sure what to make of this, but a guy who runs a pretty decent blog apparently works at ESPN.com and is soliciting opinions about Insider. He wants to know why you don’t subscribe.
For me, I don’t because I just don’t like the idea of paying for web content. Let me rephrase that – it’s not that I don’t like the idea, it’s just that I don’t think they have anything I really need that I can’t get elsewhere for free. I’m all for pros getting paid for their stuff, but I’m used to free content and as long as I’m still getting it (and I am – way more than I could ever read), why would I pay for it?

Virginia jumped into the AP poll this week at number 24, meaning the ACC has seven ranked teams. That ties a record set three times before, once by the ACC and twice by the Big Ten.
On note about this is that expansion has nothing to do with this, as obviously neither Miami nor Virginia Tech is ranked (nor will be for a long, long time) and no ACC team has had the pleasure of walloping them.

I’ve bagged on Skip Bayless a few times on this site. I think he’s an attention-starved blowhard. I mean, good lord, the man’s on Cold Pizza every day!
So, I’ve taken my shots at him. And he’s deserved them. It’s only fair then to point out when Bayless gets it right. His espn.com article on the Pistons-Pacers riot is a the best I’ve read. He’s the only reporter I’ve seen who rightly points out that Artest never hit the fan he charged after in the stands. In fact, it probably wouldn’t have gone any further if fans hadn’t closed in and Stephen Jackson hadn’t gone Rambo.

The sixth annual ACC – Big Ten Challenge gets underway tonight when Purdue pays a visit to NC State. Honestly, I should have put the word Challenge in quotations, “Challenge.” Is it really considered a challenge when one side wins every time? In five previous “challenges,” the ACC has won five times. The margins were 5-4, 5-4, 5-3, 5-4 and 7-2. Notice that last one – the ACC won 7-2 last year!
I wouldn’t bet that the ACC will win by the same margin again this year, but it wouldn’t surprise me. The ACC is stacked this year, but there are a few (OK, two) good Big 10 squads as well. My prediction is 6-3 ACC. I also think there will be a couple of blowouts in the ACC’s favor – keep an eye on NC State, UVA and UNC.
Here are some previews links (there are surprisingly few):
The Duke Basketball Report
The Charlotte Observer
ESPN.com (shockingly bare)
CBS Sporstline (Gregg Doyel)
Oh, by the way, while we are comparing conferences, unless I’m missing a game, the ACC is currently 3-0 against the Pac 10 this year, with two lopsided wins (UVA over Arizona and UNC over USC).

Virginia played their annual rivalry game with Virginia Tech this weekend. This year’s game had unusual importance, in that it was not only a conference game this time, but the ACC title and a possible BCS bid was at stake (in part). It was a tight game for most of the contest, but late in the game, the Hokies seized control and won handily 24-10.
But still, Virginia is a winner.
They are winners because after the game, Virginia President John Casteen announced that UVA would not accept a bid for any bowl game played during exams, a period between December 13-21. The key here is that the Cavaliers, as I predicted, were in line to get a bid to the Champ Sports Bowl in Orlando. That bowl is played on December 21.
Kudos to UVA! What a great message for college athletics. Remember these players (and band members, cheerleaders, student-trainers, dancers, etc.) are all students first. Football is an extra-curricular activity, so let’s not forget (as the SportsProf wrote) the curricular.
At bigtime D1 programs, bowl games mean a lot. They mean money, a nice trip for the players and their families, a validation of the season, recruiting ammo, and a month or more of extra practice. For coaches, those extra practices are particularly valuable.
When Virginia said no to the Champs Sports Bowl (and hell, that name alone should have been a good enough reason to reject them), they took the very real risk that they’ll not go to any bowl game. Some are trying to “trade up” to the Peach Bowl, but that’s extremely unlikely to happen. More likely, UVA will have to travel to Boise, or it’s still possible that they’ll get shut out altogether. It’s not likely given the relatively small number of eligible teams nationally, but it could happen.
So kudos to the University of Virginia for striking a blow for academics against the big business of college sports. It probably only amounts to a drop of water against a granite boulder, but over time those drops could make their own bowl.

The ACC has official tie-ins with six bowls, the BCS and five others The five bowls are the Gator, Peach, Champs Sports, Continental Tire and MPC Computers Bowls. They select in that order. Other than the BCS, there is no real rule on what team the other bowls have to select. The Gator and Peach are required to select a team one game within the highest ranking available team, but that doesn’t really limit their options too much. No, the five “at-large” bids go only partly based on season records. Just as important is national recognition (read: TV revenue) and number of fans projected to buy tickets and travel. Remember bowls aren’t so much rewards for the teams as they are marketing vehicles for the host cities.
There are really just two games that matter to ACC bowl picks, Virginia at Virginia Tech this weekend and the Hokies at Miami next weekend. While those two games can produce four different outcomes, only three possible ones matter. If Miami beats Tech, they’ll go to the BCS and Tech will be picked ahead of Virginia, regardless of who wins that Cav-Hokie battle. Why? Because Tech’s fans are known to be very loyal and to travel. It’s not like they care about basketball season.
The other team of significance is Florida State who has already completed their season. They can’t get to the BCS, but you can be sure that they’ll get picked high among the next three teams.
I’ll run down the six bowls and list the possible ACC team in each, with the most likely team listed first.

END_OF_DOCUMENT_TOKEN_TO_BE_REPLACED

Carolina looked impressive for the second game in a row last night against Tennessee. They built a 20 point lead in the first half, further rinsing out the bad taste left from their loss to Santa Clara.
It’s too bad that Iowa beat Texas in the other semifinal. I was looking forward to a Tar Heel – Longhorn matchup. There would be plenty of intrigue in that game.
The most obvious storyline would be revenge for the Tar Heels. Texas knocked them out of the NCAA Tournament last year.
Then there’s the pretty strong rivalry Texas and coach Rick Barnes built against Kansas in the Big 12 while Roy Williams was the coach there.
On top of all that is the old, bitter rivalry that Barnes had with Dean Smith when Barnes was at Clemson. He was the the first coach since Krzyzewski to really verbally challenge Dean, and it got ugly at times. Roy Williams was long gone by then, of course, but he always stayed very close to his mentor and surely harbors some resentment towards Barnes. In fact, I believe Ol’ Roy’s son was on those Carolina teams when they had the Clemson run-ins.
Ah well, it’s not happening. Instead, UNC will play Iowa for the title. The only coaching tie there is that Alford was a freshman on the Indiana team that upset UNC and Michael Jordan in ’84. Roy Williams was an assistant on that Carolina team. Pretty weak, I guess, but they say that revenge is a dish best served cold, right?

Ron Artest just kills me. Kills me. If the various interviews yesterday weren’t enough, with his constant pimping of his new album and record label, this quote just, well … I don’t even know what to say about this one. Read to the bottom.
BTW, do you think Artest spelled his company that way on purpose to be cool, or do you think he just doesn’t know how to spell ‘Warrior’? I wonder if Dwyane Wade’s mom helped him? 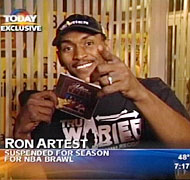 Oh, one more thing (I really could go on all day, but I’m restaining myself) – could this guy be any more oblivious to the world around him? Smiling and holding up his CD on the Today Show while being interviewed for starting the biggest brawl in American pro sports history? The scientists at the Carnegie Mellon Institute For Advanced Cluelessness couldn’t engineer a bigger rube.